Recently, there has be an upsurge of interest in organic foods. These are foods that have been produced without the use of synthetic fertilizers, pesticides, fungicides, preservatives or other chemical additives.

This category of foods includes both plant products and products from animals who are raised without the use of hormones, antibiotics and who consume organic feed. In addition, foods that have been genetically modified, irradiated or fertilized with sewer sludge cannot be labeled organic.

There are a number of reasons why people choose to pay more money for organic food.

1.  Health – If the products are produced without pesticides or other chemical additives, you are less likely to find chemical residue on and within the food itself. Since many of these pesticides are toxins, the idea is you are consuming fewer toxins for your body to have to address. There is some controversy about whether organically grown foods have more nutrient value, although some research has shown an increase in the level of phytonutrients in organic foods. However, the absence of chemicals seems to be enough to motivate some to buy organic, even without the added incentive of better nutrition.

2.  Environment – Then there are those who buy organic because of their concern for the environment. Pesticides and other chemicals used in food production can harm the soil, pollute the water and have a devastating effect on the ecology of the planet. Having said that, there are those who feel that the advantages of chemicals in food production—higher yield to feed more people, elimination of potentially devastating pests--outweigh the disadvantages.

3.  Animal cruelty – Organic methods of producing animal foods, by their very nature are kinder to the animals involved. For instance, if you can’t use antibiotics to keep an animal healthy, you must rely on fresh air, regular exercise, good quality food, etc. to keep the animals from getting sick. Our food supply today, often relies on denying these things to the animal in order to produce more food at a faster, more efficient rate. There are those who will buy organic foods for this reason alone.

4. Worker safety – Those whom we rely on to produce and harvest our crops, do so at some risk to themselves from the pesticides that are used. Continuous exposure to these chemicals may have long-term effects on their health. Organically grown foods do not present this same type of risk and this is an incentive for some people to buy organic.

There are some guidelines in place governing what qualifies a food to be labeled organic. In the case of plant products, such as fruits, vegetables and grains, organic means that they have been grown without the use of synthetic fertilizers, herbicides, fungicides, insecticides, or other synthetic chemicals.

Whether animal foods, such as meat, eggs and dairy products can be considered organic is defined by the grazing conditions of the livestock, the absence of antibiotics and hormones, and the use of organic feed. As mentioned above, in order to be labeled organic, the foods may not be genetically modified, irradiated or fertilized with sewer sludge.

Recently, the U.S. Agriculture Department has refined the definition of what qualifies as organic livestock. According to the new rules, the animals must spend at least one third of the year grazing on pasture, and at least 30 percent of their feed must come from grazing. This is an improvement on former rules that merely required that the animals have access to pasture. 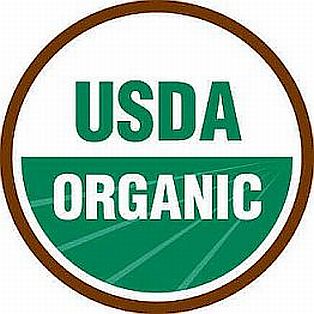 Packaged foods that have passed certification by the USDA for organic content, will display a green and white seal on their labels as an assurance to consumers that they have met the government requirement for organic foods. Make sure you notice the difference between “100% organic” foods and ones with some organic ingredients.

Here is a list of fruits and vegetables that have been tested and divided into two groups--one "always buy organic, if you can" and the other "don't need to buy organic."

Which Organic Fruits and Vegetables Should You Buy

Most likely contaminated - Buy these organic

Click here to go from Organic Food page to Wash Fruits and Vegetables.