Benefits of Vegetarian Diet  - What defines a vegetarian?

Vegetarians are people who, for whatever reason, do not eat meat, or, in some cases, any animal products. There are several categories of vegetarians, based on the type of animal foods, if any, that they include in their diet.

Are there any benefits of vegetarian diet?

The advantages of the vegetarian diet are generally health and nutrition related. Of course, this assumes that the diet is based on sound nutrition principles and not just eliminating meat or animal products.

Since plant foods are the fiber foods, and animal foods have little or no fiber, it makes sense that if you eat all or mostly plant foods, you will get more fiber. This is not to say that meat eaters cannot get enough fiber in their diet, but only that vegetarians may find it easier.

Fiber, both soluble and insoluble, is found in plant foods, including fruits, vegetables, legumes, seeds and whole grains. It is generally fiber that gives texture to foods. Celery has crunch because of insoluble fibrous strings in its makeup. The snap when you bite into a fresh apple comes from the pectin fiber in its skin. Whole wheat bread has a rougher texture, from the bran fiber that covers the wheat kernel before it is ground into whole-wheat flour. Corn on the cob has a satisfying crunch due to the fiber in the outer skins of the corn kernels.

Dairy foods, meats, oils and sugars are noticeably missing from this list of fiber foods, because they do not contribute fiber to your diet unless it is added during processing.

Recently, there have been a number of studies that suggest that a healthy diet should include colorful plant foods that seem to have a protective effect with regard to preventing disease. These are the deep green, vivid red and purple, and bright yellow and orange foods. The protective substances in these foods are called “phyto-nutrients"--and they appear to "fight" for you. Again, because of their reliance on all or mostly plant foods in the diet, vegetarians tend to eat a larger number and variety of these phyto-nutrients. This may be why vegetarians tend to have a lower incidence of heart disease and some cancers.

When a vegetarian replaces meat in the diet with other forms of protein such as legumes, whole grains, seeds and nuts, they are also increasing the amount of “complex cars” otherwise known as “good carbs” in their diet. These carbs provide energy, without the problems that may be associated with eating too many “simple carbohydrates” such as white flour products and sugar.

Saturated fats are also implicated in a rise in LDL levels (otherwise known as the “bad” cholesterol) in the blood.

(5) Vegetarians are less likely to eat too much protein.

Believe it or not, it is possible to eat too much protein. If you eat too much protein, your body can convert it to energy, but if that energy is not used, it will be stored as fat, which could lead to obesity. In addition, eating too much protein puts a heavier load on the kidneys as they work to get rid of the by-products of protein metabolism.

There has also been some suggestion of a link between eating large amounts of animal protein (which is usually accompanied by saturated fat), and heart disease, some cancers and possibly diabetes.

Vegetarians generally do not have the problem of eating too much protein because they have eliminated the most concentrated source of this nutrient—meat (along with its accompanying saturated fat). In fact, most vegetarians are concerned with just the opposite problem--getting enough protein.

Interesting Fact about Benefits of Vegetarian Diet:  Did you know that your liver protects you from harmful substances that you eat? It is your last line of defense against toxins you ingest getting to your brain or other organs. The fewer toxins you ingest, at least as far as is within your power, the more you will help your liver to stay healthy and able to perform its vital functions. Click here for more information on liver health.

If you really think about it, it's very likely that vegetarians, especially vegans, eat fewer toxins, because the toxins in animal feed such as pesticides and environmental chemicals, are more concentrated in the meat, and particularly in the fat of the animal. While a person eating plant foods may only be exposed one time to the chemicals that are in and on the plant foods they eat, animals are exposed throughout their life and the toxins they eat will be stored up in the fat in their bodies. 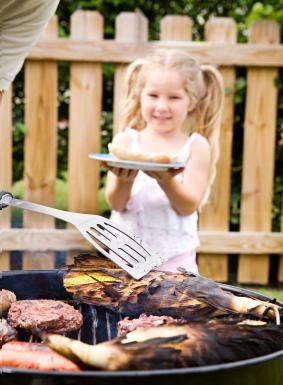 In addition, most animals that are raised for meat are given hormones and antibiotics for various production reasons, and these can show up later in the meat you eat. Dairy products, especially higher fat versions, can also have this problem.

Of course, choosing foods from sources that use a minimum of toxic chemicals in their production can mitigate this problem. This concept applies both to vegetarians and meat eaters and may be one basis for helping your body to stay healthy.

Outdoor cooking can be hazardous to your health

There is significant evidence that grilling meat, fish and poultry produces carcinogens due to the high temperatures and “charring” that causes a chemical change in the meat. Since vegetarians don’t eat meat, grilled or otherwise, this could be considered one of the benefits of a vegetarian diet. Meat eaters can reduce their risk by marinating the meat first and by limiting the amount of grilled meat they include in their diet.

(7) A vegetarian may ACE the vitamin test.

Although there are some vitamins that vegetarians may need to watch for deficiency, it is generally agreed that a vegetarian diet based on sound nutrition will generally have an abundance of Vitamins A, C and E. This is largely due to the fact that these vitamins abound in vegetables, fruits and whole grains.

(8) Eating a vegetarian diet may be easier on your budget.

A vegetarian diet may be less expensive than a meat-centered diet. As a rule, plant sources of protein such as beans, peas and grains are less expensive than animal sources. A recent study suggested that vegetarians, on average, spend about 20% less on food than meat eaters. However this advantage could be offset by the cost of meat analogs, more exotic fresh plant foods and pricey herbs and supplements, depending on what you buy and where you buy it.

(9) Vegetarians may have less exposure to food-borne illness.

Of all the things we eat, meat is most likely to be the cause of food-borne illness. Even indirectly, animal products can contaminate vegetables and other plant foods if they are not handled properly. This is not to say that you can’t get sick from plant foods, only that it is less likely unless those foods have somehow come into contact with animal waste or other contaminated animal products. In addition, vegetables, fruits and whole grains are generally easier to digest, so a vegetarian is less likely to suffer from chronic indigestion, unless there is some underlying health problem.

As a corollary to this concept, a vegetarian kitchen may contain fewer of the microbes that cause illness, since many, though not all, of these bad guys originate with meat products. It is important to say here that proper food handling practices should be used in all kitchens, regardless of a person’s lifestyle.

Fun Fact for Benefits of Vegetarian Diet:  Do vegetarians smell different? There is some evidence that vegetarians do not smell the same as meat eaters. Apparently, animals can tell the difference between a meat eater and a vegetarian, and they may feel less threatened by someone who is not a potential predator. I don’t know if this is true, but it is fun to consider! (Of course, the flip side would be that the animal might be MORE likely to attack a vegetarian because he views the herbivore as weak and not a threat. Consider the hamster!!)

On the other hand

As with anything, there are advantages and disadvantages associated with a vegetarian diet. These pros and cons encompass the realms of nutrition, health, economy and even society's expectations.

Anytime you restrict one food group in your diet, you may create nutritional concerns that need to be addressed. In the case of the vegetarian diet, there are some specific nutrients—Protein, Vitamin B12, Vitamin D, Iron, Zinc and Omega-3 Fats--that could be affected by eliminating meat from your diet.

Aside from the nutritional concerns when following a vegetarian diet, there are also social considerations. Although in some places, people take a vegetarian lifestyle in stride, there are those who are uncomfortable or even disapproving of this way of eating.

Some may feel that if you're a vegetarian, you think that everyone should be also, and that you will look down on them for eating meat. Others may think that vegetarian food is weird or unpalatable, possibly without really knowing what it is. Another group firmly believes that eating meat is “macho” and that “real men eat meat!” Invitations to dinner may be few and far between, because the chef simply does not know what kind of meal to make that does not have meat as its main course.

Here are some suggestions to help alleviate the social concerns that may be associated with being a vegetarian in a meat-eating world:

-Reassure your friends and family who may be skeptical about your vegetarian diet, that although you don’t eat meat, you are not uncomfortable with them doing so. (If you ARE uncomfortable, that is another story!)

-When you make new friends, let them know reasonably soon that you eat a vegetarian diet, so that they will have that information before they invite you over for dinner. If they invite you before you get the chance, tell them right away before accepting the invitation. As an alternative, you may even suggest going out to a restaurant that you know has vegetarian food, so that everyone can be easily accommodated.

-If you find yourself at a sit-down dinner where the menu is predetermined, just make the best of it and eat the things you can. This is probably not the best time to announce that you don't eat meat!

-If they are open to it, share favorite recipes or cookbooks with your friends and family, so that they will get an idea of how you eat, and they can even use those recipes when they have you over for dinner. There are many people who simply cannot imagine what a vegetarian diet includes!

-When traveling, take along some portable vegetarian food, such as dried fruit, nuts, healthy chips, crackers and peanut butter, or food bars to avoid having to track down something suitable while on the road.

-Try to keep a sense of humor about reactions to a vegetarian diet.If you take yourself and your diet too seriously, the difference between you and the average meat eater may cause conflict and stress in your life, which is counter-productive to good health.

Click here to go from Benefits of Vegetarian Diet to Vegetarian Stories page.