Unhealthy Eating
Is it Addictive?

I always have my ear to the ground, when it comes to nutrition information. As a result, I heard about two apparently unrelated issues from two completely different sources, but one so perfectly complemented the other, that I knew I had to connect the dots.

I heard the first bit of information, as I was fixing breakfast one morning. “Those guys in the morning” on our local radio show were talking about a study they had heard that suggested that unhealthy food is as addictive as cocaine! They went on to describe a scenario where lab rats were given unlimited access to unhealthy food (French fries came to my mind, but it could have been any type of junk food—-high in fat and/or sugar) normally consumed by humans, described in the study as “cafeteria food.”

After forty days, the rats were given a choice between the unhealthy food and normal, healthy rat food. The catch was, if the now obese rodents chose the unhealthy food, they would get an electric shock on or around their pudgy little feet. You probably guessed that they continued to go for the unhealthy food, in spite of the shock, and the scientists determined that they were addicted; in other words, a change in their brain had occurred that compelled them to go for the food, regardless of the negative side effect--the pain from the electric shock.

These rats also compulsively ate too much, even to the extent of making faces when they were feeling discomfort from overeating, but still they soldiered on. (It reminds me of myself at Thanksgiving dinner!)

When I investigated this study further, I found that there were actually three groups of rats. The first group was the one described above. The second group was allowed some unhealthy food, but not unlimited amounts and the third group was fed a normal diet of healthy rat food. In this way, the scientists could compare the chow hounds to the other two groups. The result was that the overfed, obese rats continued to overeat, regardless of the negative side effects.

Later in the week, as I was assimilating this information, I received an email from a visitor to our healthy eating website, in which, in the nature of an FYI, she sent me a link to the nutritional information from a popular restaurant—information that had only recently been published.

Here is a brief portion of that information:

To say these numbers shocked me, would be an understatement! Most people do not consider that when they order a meal at a restaurant of ribs, pasta or salad, with no side dishes, that they may be getting enough calories and fat for a family of five or six! When you take into account that eating out has become the norm and not the occasional choice it once was, it’s not surprising that we are finding our girths expanding as our health recedes!

So how is this appalling revelation connected to the voracious rodents mentioned above? Think about it! When we eat large amounts of calorie, fat, sodium, and chemical laden food, we gain weight! Then when we try to do something about it, we find that we are having a difficult, if not impossible time foregoing the calories and fat, and in spite of the “shock” of that number on the scale, our tight clothes and the “pain” of social censure and physical distress, we continue to eat more than we should.

I understand that we are not rats; we are human beings. Nevertheless, if rats can be affected in this way, it stands to reason that we may have a similar response. This supposition certainly seems to be borne out with the correlation between the increased availability and consumption of unhealthy food and the upsurge of obesity in general and morbid obesity in particular.

In a way, we've become “human lab rats,” allowing ourselves to be managed by the keepers of the food supply. Of course, it’s partly our own fault because, unlike rats, we are free to eat what we like. We can also vote with our food dollars for the kind of food that will keep us healthy. 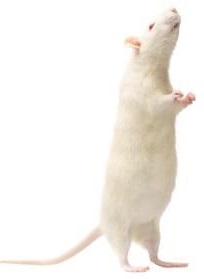 Find out for yourself about unhealthy eating

The difference is that, unless they are from “The Secret of NIMH”, rats cannot do research or educate themselves about the foods they eat. Fortunately, human beings can. Although you may not dine at the particular restaurant whose nutritional data is mentioned above, you can take a minute to look up the information about the restaurants you do frequent, and then adjust your habits accordingly. You can read food labels and pay attention to the foods you buy. As this study suggests, it is very likely that you can protect yourself from becoming addicted to food by making informed food choices.

On the other hand, if you already find yourself in the obese category, you now know that overcoming what may be an addiction and changing your brain chemistry to a healthier one, will not be easy. It’s not just about willpower when your brain is urging you to eat. As with any addiction, it will take time and support, but you can do it! Information about unhealthy eating may be one of your best weapons in the fight.

Unhealthy eating once in a while is probably okay.

After reading about this study, I posted a note about the unhealthy eating rat experiment on Spark People.com, and a very astute fellow blogger pointed out that she was encouraged by the fact that the middle group, who had only limited exposure to the so-called “cafeteria food,” actually did okay when it came to the final test. In other words, you probably won’t become addicted by that occasional high-calorie restaurant fare or piece of birthday cake. You just can’t make a habit of eating that way.

Of course, if you are already addicted to unhealthy eating, you may need to skip those things, for now, and maybe forever, but the trade off in how you look and feel will be well worth it.

Pity the rat for more than unhealthy eating!

After hearing about this study, I had a moment of pity for those poor little rats--partying one minute, and getting punished the next day for the exact same behavior. I suppose that’s life when you’re a lab rat, but I refuse to be a human one and I hope you will, too.