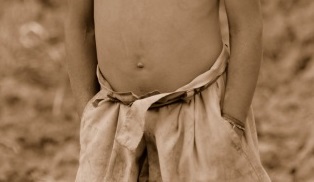 Kwashiorkor is a form of protein deficiency which is associated with sudden malnutrition, such as what happens when a mother weans one child to begin feeding another. It's name comes from a word used in Ghana related to childbirth.

In underdeveloped countries or poverty stricken areas of developed countries, the weaned child will often receive a far less adequate diet than when it was feeding on the nutrient-dense breast milk, resulting in protein deficiency.

Kwashiorkor is often the culprit in those heart-wrenching photos of children with distended bellies that are used to encourage donations to world hunger relief organizations. The disruption of the child’s fluid balance and a susceptibility to bacterial growth and infections and infestations, due to protein deficiency causes the swollen belly. Their liver may also be affected since they lack the protein transporters to carry the lipids out of the liver and to make the enzymes needed for liver detoxification.

-Most common in young children, including older infants

-Protein deficiency due to poor diet, infections, or illness

-Failure to grow and develop normally

-Some muscle wasting and weight loss

The effects of protein deficiency can be reversed if intervention occurs before too much damage has been done. In severe cases, it requires careful introduction of food, in small amounts at first, until the patient is sufficiently recovered to handle larger servings. If this intervention does not occur in time, the result could be permanent disability or death.

Those most likely to be affected by protein deficiency

Infants and children in underdeveloped countries

Those who live in extreme poverty

The elderly, especially if they live alone

Those with eating disorders such as anorexia nervosa, or who simply don’t eat enough

Those addicted to drugs or alcohol, especially when combined with poverty

Those pursuing a low-protein diet for whatever reason, including weight loss

Those with TB or AIDS

It takes very little to make a difference to children living in poverty. If you would like to help make a difference, find an organization that is working to alleviate hunger around the world.

Bright Hope International is one such group and you can click on this link to find out how you can help.

Click here to go from Kwashiorkor page to Nutrition page.