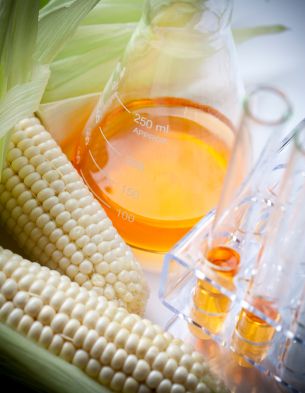 High Fructose Corn Syrup (HFCS) has been in our food supply for over 40 years. In the last twenty years, it has become ubiquitous.

If you don't believe me, try finding packaged foods in your grocery store that don't have it. Everything from bread, to pickles, to crackers to salad dressing, and of course, soft drinks, include HFCS as an ingredient.

Is HFCS helping to make us fatter?

Some health experts believe that the rise in obesity in the U.S. is in part related to the increased consumption of high fructose corn syrup in the diet. There is evidence that when you eliminate the HFCS from your diet, your food cravings may lessen and you will eat less.

In addition eating too much high fructose corn syrup may lead to a condition known as "metabolic syndrome," which is characterized by too much fat in the abdominal area, consistently high blood pressure, less than healthy levels of good cholesterol, high triglyceride levels in the blood and a condition called insulin resistance.

A study at the University of California showed that cancer cells can readily metabolize fructose to increase proliferation. This could have major importance for cancer patients who include refined fructose in their diet. The study also suggests that reducing refined fructose intake may disrupt cancer growth.

This is particularly interesting to me, since one of my pet peeves is that very little attention is paid to diet during many conventional cancer treatments.

Another problem with consuming HFCS is that it may lead to a condition called Non-Alcoholic Fatty Liver Disease. A study at Duke University showed a link between consumption of HFCS and this disorder that causes scarring and hardening of the liver, and which can lead to cirrhosis, liver failure and even liver cancer.

Mercury is not just in your thermometer

You probably know that HFCS is made in a laboratory. Unfortunately, the chemicals used to produce HFCS cause mercury contamination according to a study published in 2009. This study found that between one-third and one-half of all products on the market with HFCS tested positive for mercury.

What you may not know is that mercury is highly toxic and may cause severe neurological disorders. It may also result in the loss of teeth, hair, and fingernails, as well as cause weakness, impaired kidney function, memory loss and moodiness.

Refined sugar in any form is questionable as a regular part of a healthy diet.

Some food companies have capitalized on the negative aspects of HFCS by creating products made with "real sugar" in some form. While most health experts would tell you to stay away from processed foods with added sugar in any form, there may be some small advantage in at least staying away from HFCS.

Once the general public started to realize the potential health hazards of consuming high fructose corn syrup, an advertising campaign began to promote it as being "the same as sugar."

Keep in mind that "fructose" is a simple sugar that can be found naturally in foods such as fruit.

HFCS is not in any way natural, but is a product of a food chemistry lab, whose job is to find less expensive ways to make processed foods.

These labs rarely, if ever, have your good health as a goal of their experiments, but are instead concerned about the food company's bottom line!

Calling it by a different name

When that effort was not as effective as hoped, the process of changing the way HFCS is listed on food labels, calling it "corn sugar" or just "fructose" instead of High Fructose Corn Syrup or HFCS was instituted. Although this may sound more innocuous, it is the same questionable ingredient.

I suggest that you read labels and skip any foods that list HFCS, High Fructose Corn Syrup or Corn Sugar. Be skeptical of foods that show "fructose" as an ingredient. It is even possible that if we, as consumers, refuse to buy these adulterated foods, the companies responsible will change their thinking and provide healthier alternatives.

In addition, if you eat more fresh, whole foods and limit processed foods, fast food and soft drinks, the issue of whether HFCS a.k.a. "corn sugar" is unhealthy will not  affect you or your health.