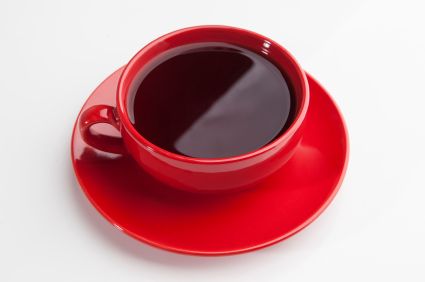 Can you be healthy eating caffeine?

You may be wondering what a page about caffeine consumption is doing on a healthy eating website. However, unless you are particularly sensitive to this popular stimulant or have a condition that precludes its use, there is no real evidence that moderate use of caffeine will inhibit your healthy eating goals.

Having said that, it is important that you consider the source of the caffeine that is in your diet.

Coffee and tea contain antioxidants that have health benefits and even very dark chocolate (at least 70% cacao) is being promoted as healthy in small amounts.

It is a stimulant that enhances alertness and lessens the feeling of tiredness.

Since caffeine is a vasorestrictor (makes the veins smaller), it can help with the pain of headaches that is due to dilated veins in the head.

Most of the caffeine in cola comes from additives derived from coffee, although kola nuts have some caffeine in them naturally.The level of caffeine in tea depends on the type of tea, where the tea was grown, the time of year the tea leaves were picked among other factors.

Guarana (pronounced gwa-ra-NAH) is one of the richest sources of caffeine, containing up to three times the amount of caffeine as is present in coffee beans. It has recently become a popular ingredient in energy drinks in the U.S., but has long been used in South America as a "tonic."

In case you were wondering, the US RDA considers caffeine to be generally recognized as safe (GRAS).

At last count, 80-90 percent of adults and children in North America consume at least some caffeine daily, which helps to make caffeine the most widely used psychoactive (affects mind or mental processes) substance in the world.

The intensity of response to caffeine varies greatly, since not everyone metabolizes caffeine at the same rate. For this reason, caffeine may affect people differently with regard to blood pressure, insomnia and other side effects.

What are the side effects?

Caffeine may cause anxiety as well as depression because of the way it alters brain chemistry and it can be addictive.

In addition, too much caffeine may upset normal bowel rhythm, which may cause irregularity.

It may also act as a mild diuretic, causing you to lose water. It has been estimated that it takes approximately 3 cups of water to compensate for the dehydrating effects of caffeine.

--A pharmacological dose of caffeine has been set at 200 mg.

--An 8 oz. serving of brewed coffee has about 95 mg of caffeine.

--A 12 oz. container of the average iced tea has about 10 mg of caffeine, depending on how diluted it is.

--A 12 oz. serving of Mountain Dew soft drink has about 45 mg of caffeine.

--A 12 oz. serving of Sunkist orange soda has about 36 mg of caffeine.

--A serving of most energy drinks can have anywhere from 30 to 150 mg of caffeine. (Be sure to check the label, since many containers hold more than one serving.)

--A 9.5 oz Starbucks Frappuccino Mocha has about 72 mg of caffeine.

--An 8 oz. serving of chocolate milk or hot cocoa has about 5 mg of caffeine.

--A 1 oz. serving of milk chocolate has about 6 mg of caffeine.

--A 1 oz. serving of dark, semi-sweet chocolate has about 18 mg of caffeine.

--A 1 oz. block of baking chocolate has about 26 mg of caffeine.

--Dark chocolate covered coffee beans have about 235 mg of caffeine per 1 oz. serving.

(The darker the chocolate, the less sugar and the more caffeine it contains.)

--Coffee-flavored desserts can have 40-85 mg of caffeine per serving.

--Coffee-flavored yogurt can have 45 mg of caffeine per cup.

--Some weight loss aids may contain 200 mg of caffeine per tablet.

--Diuretic tablets may contain 100 mg of caffeine each.

--Pain relievers may contain anywhere from 30-65 mg of caffeine.

--Cold remedies often contain about 30 mg of caffeine per tablet.

--Drugs that are taken to keep you from getting drowsy may contain anywhere from 100-200 mg of caffeine per tablet.

*Remember that the caffeine content listed for each item is approximate and may vary based on changes in product recipe and how product is grown, brewed or processed. This list is mainly for comparison purposes.

It is difficult to find justification for including caffeinated soft drinks or sugary coffee concoctions in your healthy eating plan.

Healthy Eating Caffeine - Who should NOT use it?

Some people are so sensitive to the effects of caffeine, they must avoid it altogether. It should also be avoided is you suffer from ulcers, acid-reflux, heart arrythmias or Irritable Bowel Syndrome (IBS).

In some women, caffeine can aggravate fibrocystic breast disease (a harmless but annoying condition where the breasts get lumpy).

If you are pregnant, you should know that researchers have found that consuming five or more cups of coffee per day doubles the risk of miscarriage. In addition, breast feeding mothers should limit their intake of caffeine since it will pass through their milk to the baby.

Those who are prone to migraine headaches, have Crohn’s disease, hiatal hernia or osteopenia, also may have to eliminate caffeine from their diet.

Important Fact for Healthy Eating Caffeine:  It should also be noted here that caffeine may increase craving for alcohol in alcoholics and recovering alcoholics.

Click on this link for more information on diet for recovering alcoholics.

Is it possible to be healthy eating caffeine?

Aside from the obvious reasons we consume caffeinated products, to clear brain fog, keep us alert and enhance our mood, there seem to be some other benefits as well.

Both coffee and tea, two of the usual sources of caffeine in the diet are significant sources of antioxidants.

Caveat for healthy eating caffeine: If you habitually use caffeine to mask your body's need to sleep, you will pay a price in the long run. Your physical and mental health will suffer if you constantly override your body's built-in warning signals that you need to rest.

For most people, moderate use of caffeine can be part of a healthy lifestyle.

Caffeine in the diet comes from a number of sources, including coffee, tea and soft drinks.

Some side effects of caffeine consumption include headache, irritability, nausea,insomnia and nervousness.

Some people are sensitive to caffeine or have medical conditions that make its consumption unwise.

There is some evidence that caffeine may help prevent mental decline.

Click on this link to go from Healthy Eating Caffeine page to Phytonutrients page.