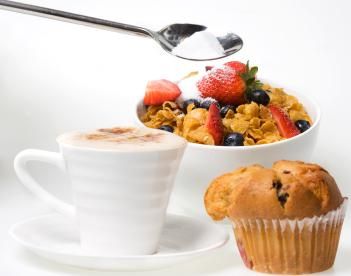 In simple terms, the glycemic index (GI) is a way of comparing carbohydrate foods based on their immediate effect on blood sugar levels. The highest glycemic foods will release glucose (sugar) almost instantly into the bloodstream while the lower glycemic choices will take much longer to digest, and the glucose will be released more gradually into the bloodstream.

Why does it concern us?

With the rise of obesity, diabetes and heart disease, the way your body handles carbohydrates has become an important issue. It seems advantageous for most people to include lower glycemic carbs more often than the higher glycemic ones. The reason for this is that the speed and amount of glucose entering your blood has an effect on insulin levels, and insulin levels have a lot to do with the way you feel and how much fat you store.

It appears that one way to keep your insulin levels normal is to maintain a gradual, steady release of glucose into the bloodstream, rather than the surge caused by high glycemic foods.

Experts can’t seem to agree on some of the exact GI values, due to different testing methods, food composition and physiology of individuals, so I have not included glycemic index number values for the foods listed.

This seems to be more easily accomplished by eating foods that are lower on the index and therefore, digest more slowly. This is particularly important for pre-diabetics, diabetics and those trying to lose weight.

Fruits and vegetables are fresh and uncooked, unless otherwise indicated.

There are foods that have no appreciable effect on blood sugar

There are a number of foods in the list that would score zero on the GI scale which means that they would have little or no effect on your blood sugar. These include the following:

Fun Fact:  How a food is cooked, particularly how long it is cooked can have an effect on its GI value. Starchy vegetables have a lower glycemic value when eaten raw or lightly cooked than when fully cooked. This is because cooking foods changes the complex starches into more simple sugars that digest more quickly. In the same way, pasta cooked al dente (still firm) has a lower glycemic value than fully cooked pasta.

-Eat fruits that are just ripe but not overripe.

-Serve pasta while it is still firm, al dente.

-Eat baked potato with skin, if possible. (Be sure to scrub the potatoes thoroughly!)