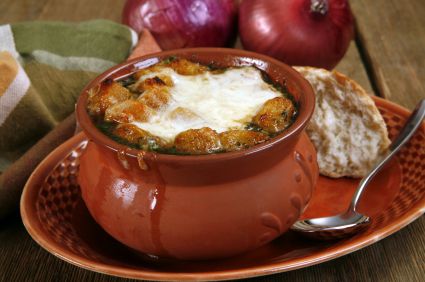 Click here for a printable copy of this recipe.

(2) Remove lid and add sugar and salt. Simmer on medium heat, stirring often, until onions are a golden brown.

(3) Sprinkle onions with flour and heat for a few minutes, while stirring.

(4) Add wine or vermouth, and simmer, partially covered for about 45 minutes, skimming every so often.

Place a serving of soup in an ovenproof dish. Float a large crouton on the soup. Add some thinly sliced Swiss cheese and sprinkle with Parmesan cheese. Bake at 350 degrees for 15 minutes or until cheese is melted and slightly browned. (You may want to put the dish under the broiler for a minute to brown.)

Making your own fondue croutons

It is easy to make your own crouton for Baked French Onion Fondue. You can use almost any kind of bread, but a loaf of French bread is the traditional favorite.

(1) Slice the bread into one-inch thick slices or large cubes.

(2) Place slices in a single layer on a baking sheet.

(3) Brush the slices lightly on both sides with olive oil. (You can skip the oil and bake the croutons dry for a lower-fat version, but you will get a less tasty result!)

(4) Bake at 350 degrees until lightly browned and crisp.

Keep in mind that you want the croutons to be hard, so that when you put them in the soup, they will hold up and not fall apart.

French Onion Soup has onions as the base, a good source of the phytonutrient, allicin. Sulfur compounds such as allicin, found in onions are anti-bacterial and may boost your immune system to prevent and fight cancer. Organosulfur compounds are also found in cruciferous vegetables.

Onions are also a good source of sulforaphane, which may protect against cancer and arthritis.

To get the most advantage, allow the onions to rest after cutting them for about 10 minutes before cooking.