Recipe Borscht
(made with potatoes and green cabbage)

Click here for a printable copy of this recipe. 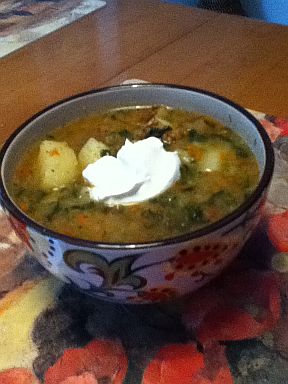 (1) Place shredded cabbage, half of the chopped onion, diced potatoes, shredded carrots and salt in a large stockpot or Dutch oven. Cover with water and simmer until vegetables are partially soft. Add tomatoes and spinach.

(2) Make a “rue” by sautéing the other half of the chopped onions in oil, adding flour and cooking until light brown. Add to soup along with the dill weed.

(3) Simmer until all vegetables are soft.

(4) Remove from heat and stir in sour cream, if desired. Another way to do this is to serve hot soup with a dollop of sour cream, rather than mixing it into the whole pot. This way you can avoid the risk when reheating the soup of boiling it and causing the sour cream to curdle.

Dill seasoning may include the aromatic seeds, leaves and stalks of the dill plant. It is often used in Russian cuisine, such as in this recipe for borscht. The seeds have a stronger flavor than the leaves and stalks. Dill is used to make pickles and may be a digestive aid with useful anti-cancer properties. It is a good source of Vitamin A, Riboflavin, Folate Vitamin B6, Vitamin C, Manganese, Iron, Calcium, Magnesium and Potassium.

Besides this soup recipe, dill can be used as a garnish and to flavor egg salad and potato salad.

Phytonutrients are plant nutrients found in fruits, vegetables, grains, spice and herbs that seem to have a positive, disease-preventing effect on your health.

For example, Potato borscht contains allicin from the onions—which may reduce blood pressure and has an anti-microbial effect, beta-carotene from the carrots, for protection against heart disease, vision loss, memory loss, cancer, and complications from Type II diabetes, sulforaphane from the cabbage, which may protect against cancer, saponins from the tomatoes, which seem to stimulate the immune system and phenolic acids from the potatoes, which also have anti-cancer properties.

This soup gets better with age, so enjoy the leftovers!